Brain washed by a parasite 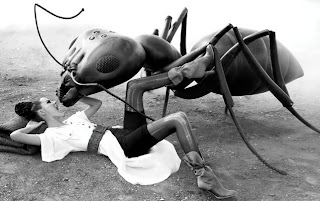 I’ve been following lots of blogs about cross-dressing. (Q.“What’s the difference between a cross-dresser and a transsexual?” A. “About 2 years.”)  And the possible reasons we do it.  None of the theories has yet convinced me.  However, what if we’ve all been brain-washed by a parasite?
It seems that ants can get this parasite that changes their behaviour.  Unlike its non-infected black-coloured brethren, the abdomen of the infected ant turns red.  And when its fellow ants return to the nest, the red-bellied ant clings to a branch, and so looks like the edible red berries in the forest canopy.  This entices birds to eat the normally unpalatable ant.  Which then spreads the parasite in its droppings.  To be eaten by ants. And so it goes.
Suppose then, that there’s this cross-dressing parasite.   No, not a bug in bikini, but one that alters our behaviour. Makes us buy loads of clothes and shoes from Sears and Asos, and wear unconvincing wigs.  This parasite also causes us to log onto the internet, and post enticing images. Which then lures in ‘normal’ guys, who also start wearing panty hose, and neglecting their wags.
On second thoughts though……..um.
Posted by Closetta

Closetta
In the closet for half a century