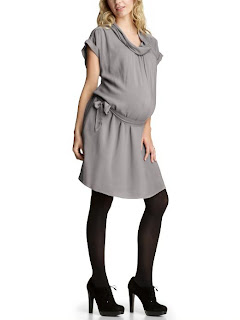 Sparkle in is one of those wonderful occasions when trannies from all over, gather for a gurly weekend.  (I was advised by one of the attendees, in a pink polka-dot dolly’s outfit that ‘What unites us, is that we are all bonkers”.  But that’s a story for another day).   It’s a year or two since my lunatic dragged me there, but it’s still seared on the old grey cells.
What did strike me was the lengths the attendees go to, false this, that, and the next thing, to try to emulate real girls.  This was driven home when I spied a real and very sexy example - she was Polish, I think – who had stopped to watch the parade. She had the (very real) hair, tits and nails – nothing fake. And a dress that fitted in way that made the heart soar in breathless admiration. (Does anyone else notice how trannies may sometimes look very convincing and even pleasing to the eye and groin, but a RLG is unmistakable?)  This one was pushing a pram, with a living baby.  As I reminded my constant companion, even a painful trip to to have the ‘outsides turned inside’ wouldn’t allow a gurl to clone one of those, unless DNA replacement becomes  possible (sigh).
Despite this truth, my loony one has sometimes lusted after one of those pregnancy kits.  Not the sort that you get from a chemist for testing urine, but one of those body-suits, complete with heavier-than-usual tits, and a pretend pregnant bulge, to let teenage girls see what they’re in for.  (Even e-bay doesn’t sell these – yet).  And in any case, since we’ve both acquired a real-life pot belly, it’s a question of whether to groan through the day in a corset, or let it all hang out.   (Dressing our age?  Purleeze!)
However, Closetta has recently noticed that wearing a nice silk 60's smock, and standing sideways-on to the mirror, with belly and bum stuck out, and hips tilted just so, affords a glimpse the fantasy pregnancy that – like perfection - lies only just out of reach.
Posted by Closetta 3 comments:

What a way to spend (another) year! 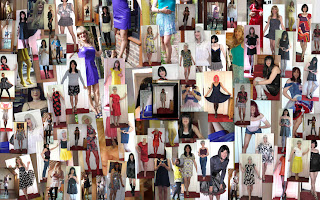 It’s probably about time I introduced you to my constant companion, Closetta. The one I’m handcuffed to.  She thinks I’m the lunatic, and vice versa.  But there’s no rancour.  Except when I get the credit card receipts.
It may surprise you to know that Closetta is a serial shopper.  She keeps dragging me off to look at frocks in shops and shoes on-screen. I’ve spent some of the best years of my life with her, searching for The Frock.  In fact after years of stuffing all her fripperies into boxes under the bed, two years ago I finally built Closetta a whole new set of closets.  And, give the girl her due for diligent work, all these closets are now rather full.  And still my sweet pet still wants more, more and yet more.
To be fair, she’s started putting on weight – after being a semi-perfect dress size 16 (but squeezing into 14 on occasion) she’s now 16 bulging into an 18.  Which means that there is some duplication and redundancy.  Though the happy memories of each garment remain.  And so purging is not an option.  Not any more. Done that, still got the t-shirt (but lost a lot of great stuff, even if I say so myself)
Despite the dress-size, Closetta has always been pleased always to be able to take a standard shoe size UK8, which is pretty main-stream.  And she can perch on a 5” stiletto with the best. She’s claims it changes the posture and so is good for the back.  She’s right of course, but I’m not persuaded yet around the office.
All these clothes of hers mean that there’s a huge range of ‘looks’ to be experimented with.  Closetta neither know nor cares how many. (Two more items this week alone).  But I decided today to take a tally.  I counted 36 tops, 43 skirts, 127 dresses, 48 pairs of shoes and boots, 38 wigs, and 8 drawers of underwear. If there’s 10 different leg-looks – coloured tights, leggings, stockings (and that’s a low estimate), then [(36x43)+127]x48x38x10 makes over 30 million different outfits.  That’s before all the variations of jewellery, hair up/down etc.  If Closetta were to wear a different outfit every second of the day, it would take her a year to try out all the possible combinations.
And now, since she’s reading over my shoulder, I think she might just try.  So excuse me if the lunatic I’m handcuffed to, drags me away for yet another photo shoot!
Posted by Closetta 1 comment:

The Devil is in the detail

One of my business school professors used to say that the ‘devil was in the detail’ ie that small thing in plans and schemes are overlooked, causing big problems later on.  It’s only lately that I’ve appreciated the several layers of meaning in this expression.
As a cross-dressing teenager I was desperate to wear girl’s clothes.  So much so, that like many, I wished I could become a girl.  At that time – way before transgenderism was out of its closet – it seemed to me the only possibility would be to ‘sell my soul to the devil’ in grand Henry James fashion.  So, in addition to hopelessly mooning outside department store windows, I took to sifting through dusty tomes in the reference section of the local library.  Hoping to find a spell, a miracle to let me be and do my heart’s desire.  If I could have sold my soul to the devil then, in return for being to change my sex at will, I surely would have done so.  (I’d already tried praying, and knew that God wasn’t planning to help anytime soon.)
In the classic stories, the hero sells his soul in a midnight pact on a deserted cross-roads.  At first it appears he gets what he asked for – riches or whatever, but somehow the devil tricks him.  “I wouldn’t sell my soul for all the tea in ”, says the hero.  “Wouldn’t you?” say the devil.  “Hmm” thinks our hero, “that’s a lot of tea.  Well, yes OK.” And is promptly buried under a giant mountain of tea, crates, and all.  (In a jokier version, our hero asks for a penis long enough to touch the floor.  And then wakes up in hospital with no legs).
Recently I was cogitating, and half-regretting I’d failed all that time ago.  Wouldn’t my life have been so different if I’d found the right book?  And then I started to wonder whether I’d actually succeeded. And had found the ancient spells, And chanted the strange Latin words at midnight in a chalked pentagram with 5 black candles.   And summoned the dark forces, and made that fateful pact.  And that I’d actually said to that Devil – “I’d like to be able to wear girl’s clothes all my life”.
And, because the Devil strikes a slippery deal, I’m still doing the liking, and still able to wear girl’s clothes.  And – yes - doing it all my life.  But, because the devil is in the detail, I’m still male. The DNA is still X and Y.
And, if I had my time again, I wouldn’t change a thing.
Posted by Closetta 1 comment:

A wig to die for? 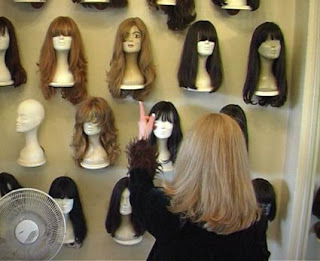 I’m a greedy Cross-dresser.  My wife (bless her) lets me indulge, and boy do I take advantage.  In another post I’ll enumerate the contents of the stuffed closets in my den, but today I’m thinking of wigs.
I have three drawers-full – short, medium and long.  My favourite wigs are blond, straight and long, but I have a good collection of darker ones too.  I bought two more just last week on e-bay, mainly ‘cos I suspected no-one would treat me for Christmas.  These were from a new supplier, who is obviously tapping into a Japanese manufacurer – the cut, and fibre is quite dissimilar from the Chinese ones.
In my lust to be more perfect, a wig made of real hair always seemed the most desirable.  And indeed I bought one (well 50% real hair) only a year ago.  Sure enough, as a dark brown 23” wig, it’s the most lustrous thing in my wardrobe. Like my fake boobs, it’s not mine own, but just brushing my fingers through it, is a turn-on.  I’ve even been casually looking on the web for one that’s blonde, and 100%.
That was, until I heard a programme on the radio about women, being killed, especially in . Some are severely mutilated. Now I’m sure, or rather I really sincerely hope, that no-one is hurt in harvesting the human hair for my wigs.  But it makes you think – what woman will willingly cut off her hair?  Or is so desperate that she sells her crowning glory?  At an average of   ½-inch growth per month, hair for such a wig as I desire, would take 3 years to grow.  If I can buy a real hair wig for $200, how little did she get anyway?
Isn’t that sad?  In deference to my sisters, I’ll stick with the modacrylic. (Though I do sometime worry that, wearing a long wig, if I accidentally eat some with my dinner, the fibre will wrap itself round my guts like fishing line in a swan’s gizzard)
Posted by Closetta 1 comment: 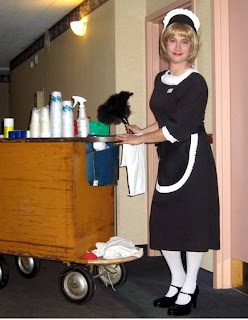 Stephen Fry recently twittered that “women trade sex for security”.  He came into some stick for this, as there’s obviously some uncomfortable truth in his comment.  In fact, as a homosexual, he wasn’t directly criticising women, more that he was implying that men enjoy a richer and more regular sex-life, with each other.  Perhaps his agenda was to persuade those ambivalent closet-bound gay men to come out.
However most cross-dressers (myself included) aren’t gay, so let’s look at another implication of Fry’s comment. Which is that genetic women, if they were logical (!) would keep their men-folk close with easily delivered sex, in the home.  Some of course will deliver regular sex (Whoopee doo!)  But regrettably many ladies get bored and stop making themselves available.  More so, they get quite selfish – “you can only have sex with me, and I don’t want any.”
But ladies, to keep your man really close, why not encourage him in his cross-dressing? Look at the benefits:
1)      He gets sexual gratification in the home, but without your being pestered.
2)      Being shy, he’ll be pathetically grateful when you buy him a small female gift, such as false eyelashes, or some perfume  (So easy for you, so scary for him) Likewise, he’ll be hugely grateful when you buy him something big, such as a dress or shoes. And do all manner of chores to show his thanks.
3)      The more you encourage him, the less he’s likely to stray, in case his shameful secret is exposed to the cruel world.
4)      He’ll be generous in buying nice clothes for you, ‘cos unlike most men, he really enjoys shopping, especially in the lingerie department.
5)      If you allow him to wear an apron, he’ll likely do the ironing.
6)      If he let him have a den, or a regular femme-day, he’ll be loyally grateful, and in return give you the long-term security you crave.
7)      He’ll never be as pretty as you, so no need to be jealous.
8)      You can borrow his stuff
9)      When the urge is on him (every 3 days IMHO) he’s just a dog wanting a bone, and will do anything you need done.
10)  Compared with bestiality, gay promiscuity, or just plain having a mistress, cross-dressing is pretty damn harmless.
So ladies everywhere, frock your man today, and enjoy a blissful marriage!
Posted by Closetta 1 comment:

Closetta
In the closet for half a century